How to Get Rid of Moles

"How to get rid of moles" is a question most gardeners hope they never need to ask. However, considering that one mole can tunnel up to 150 feet per day, it only takes a single mole turn your beautiful lawn into a landscape of unsightly dirt mounds (see the image below). This site is designed to give a quick and informative summary for those experiencing a problem with moles.

Moles: How do you know if you have them?

The presence of moles in a lawn is pretty obvious--an unsightly collection of dirt mounds scattered over your once beautiful lawn. Moles tunnel to the surface, creating the mounds, for surface feeding and removal of soil from their tunnels.

Less obvious is the damage that happens underground. Moles dislodge the roots of your favorite flowers and shrubs.

What do Moles Eat?

Apart from the tunnels and mounds, and the roots they dislodge, moles aren't the largest problem to your plants. Moles actually diet on insects and worms. It's the root-eating rodents who utilize the mole tunnel system that cause the most damage to plants. These rodents include pocket gophers, meadow voles and deer mice. 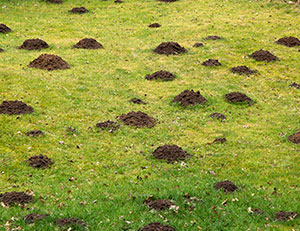 How Quickly Do Moles Multiply?

The mole breeding season is in late winter to early spring, when they have their one liter of the year composed of 3-4 pups. But, given each of these pups will grow to tunnel up to 150ft per day, that's a lot of mole activity, a lot of mounds, a huge tunnel system, and a spacious home for the root destroying pocket gophers, meadow voles and deer mice who are sure to follow!

Your first line of defense is prevention, but there are few ways, if any, to keep moles out of a lush, green lawn:

How to Get Rid of Moles

So, you already have a mole problem? There a host of mole repelling remedies and devices on the market. Natural mole repellents include: 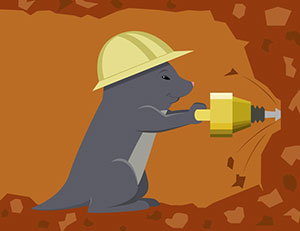 Get Help From A Professional Mole Exterminator

While we'd like to say that there is a "wonder remedy" for moles, in the end, your best bet for how to get rid of moles may be a professional exterminator, licensed and experienced to safely and effectively eliminate your mole problem.

ApolloX Pest Control Has The Skill, Experience and Equipment to Get Rid of Moles!

How to Get Rid of Moles?

Do you think you have a mole problem? Don't wait until your entire beautiful carpet of a lawn is trashed with unsightly dirt mounds. Don't poison your pets!